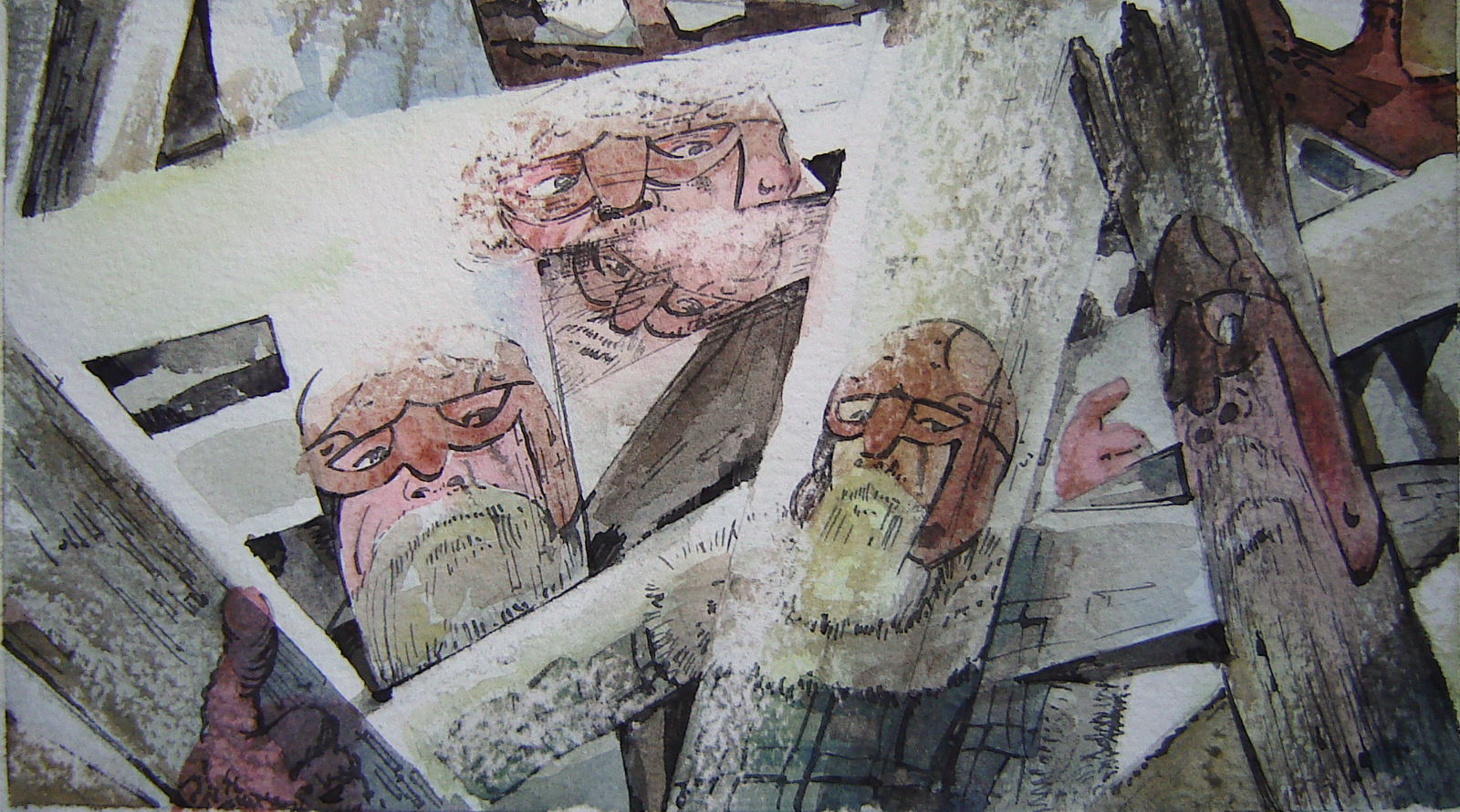 Before you stands a man warped by time and wrath, crook-backed and bitter, barely able to heft the sword in his hand. Others crowd about, like and yet unlike the first, each twisted in his own way, smeared on stones so smooth and bright that they are like looking glasses. It is a maze made of you, and staring into it, you seem to see into your self.


The titular hero (or anti-hero) of our game may be fallen, but he is still a god. And even when cut off from Orm’s great soul-hoard in Skyhold, a son of the Cloudlands has many gifts that set him apart from mortal men.

The first is that he is very hard to kill for good. Only a few things are strong enough to make his soul abandon his flesh and bones. Most deaths merely mangle his body, and a few days and a bit of soul-strength are enough to heal even the ghastliest wounds. (Of course, every day is precious to a fallen god who must make it home within three months.) 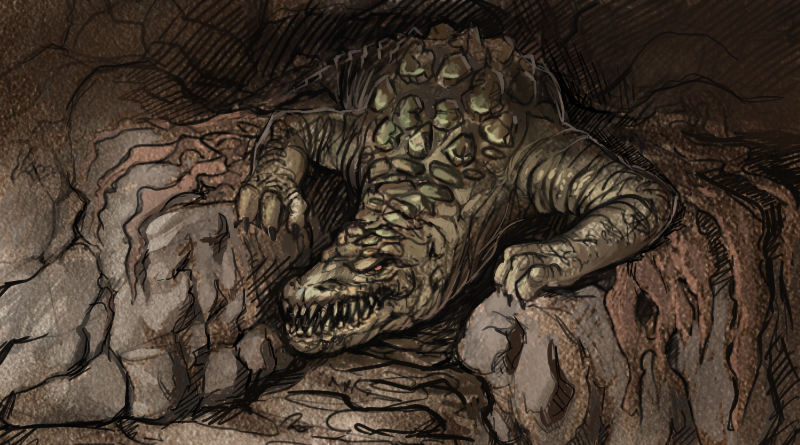 Indeed, Ormfolk are very hard to kill at all, for even the most bumbling of them has a strength and skill with the sword that outstrips most hardened earthly fighters. And a god can grow even greater in might and wits by drawing on his soul-strength—“leveling up” in RPG parlance, though here at the cost of the same hard-won “mana” (i.e., soul) pool that feeds his greatest skills.

For a god, even a fallen god, has skills beyond swordplay. The player’s god has two out of the following five such skills: Soulfire (by which he can kindle souls into a holy blaze that can burn away curses or burn up foes); Healing Hands (by which he can heal wounds and cure sickness in himself and others); Death Lore (by which he can speak to the dead, calling on their wisdom or driving off restless undead draugar); Wild Heart (by which he can bend beasts to his will or cause the woods themselves to hasten him on his way); and Foresight (by which he can see what lies in distant lands or times to come). These too draw on soul-strength. 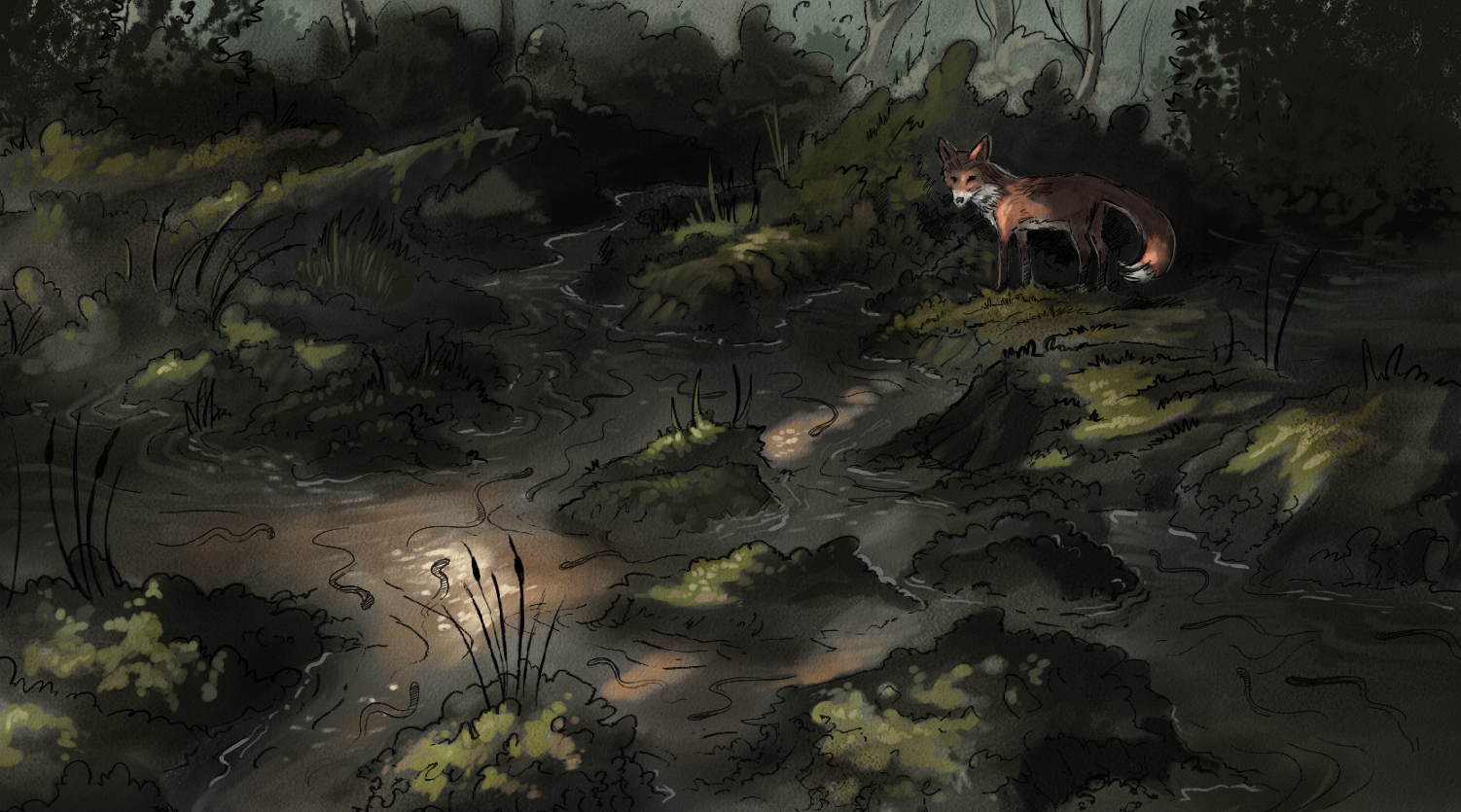 And a god has his “fetch,” the fylgja of Norse mythology (or “familiar” in folklore and modern fantasy). As the lore holds, a god’s fetch is female (a bitch wolf, a vixen, a hen raven, or a she eagle); a goddess’s would be male. Each fetch has its own advantages. For instance, the wolf fights beside you in battle, while the eagle can strike foes unaware before battle. Fetches also unlock new paths, such as letting your vixen lead starving miners astray to get them out of your way in the “Lost Ones” event.

Finally, the fallen god starts with a mighty item from the Cloudlands, such as the Lur, a horn that can stir the slumbering heart or clear the muddled head of any mortal man. And he will find more as he goes. Our items (as will be discussed in a later update) are like Lone Wolf’s: each is significant, providing not just a noticeable statistical bonus but also new abilities (like crossing streams with the Fording Stone) and new opportunities in events (such as covering an escape by opening the Fog Pot). 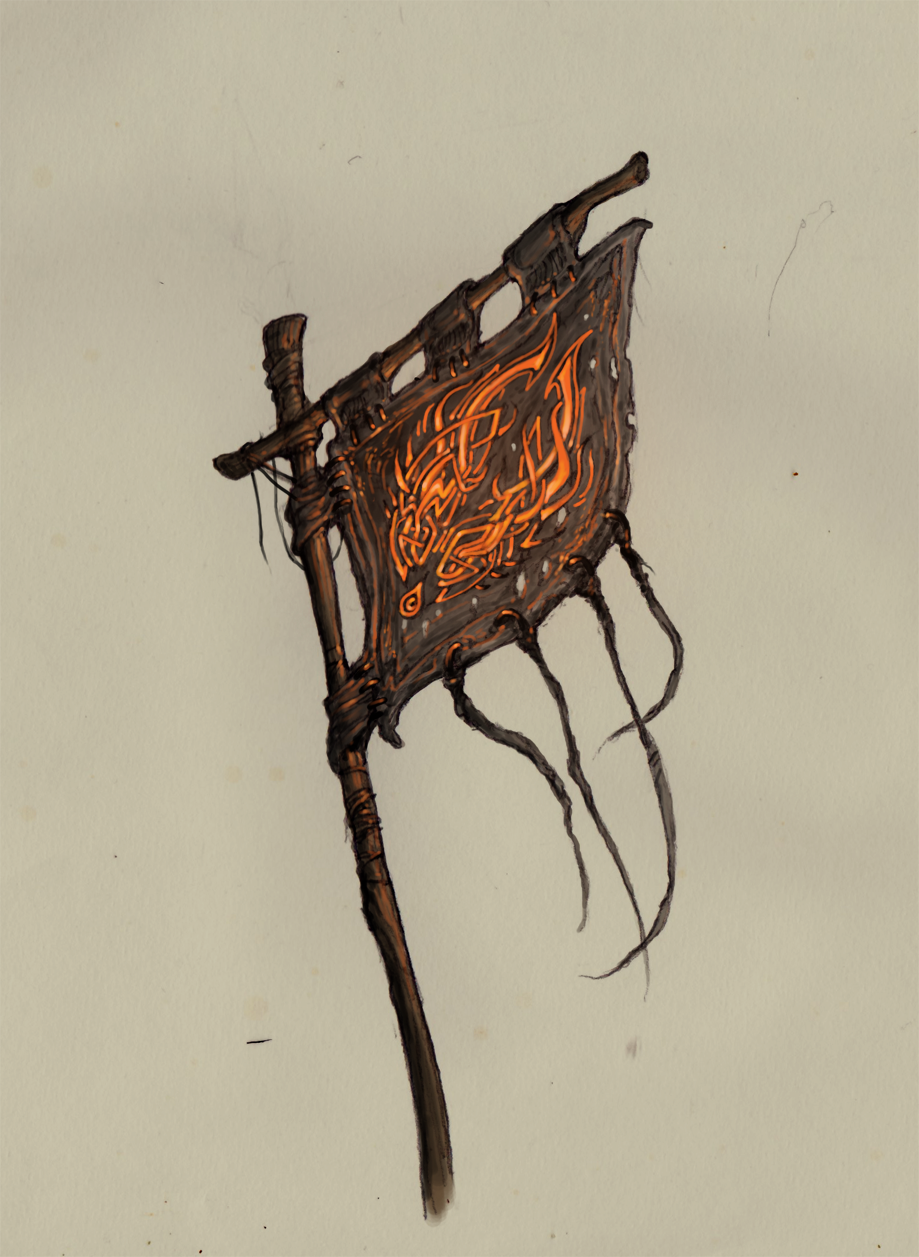 All of this power depends on soul-strength. When the god stirs the faith of men and women with mighty deeds (a faith born of fear and a faith born of love are equal sources of this strength), they freely yield some or all of their souls to him. He can also take soul-strength in harsher ways, such as killing lingering beings of old that are still swollen with souls from when they were gods themselves. And there are darker tricks still, like the Soultrap, which snares a soul as it leaves a dying body. One way or the other, perhaps one way and all the others, the fallen god must gather enough soul-strength to win his way home. 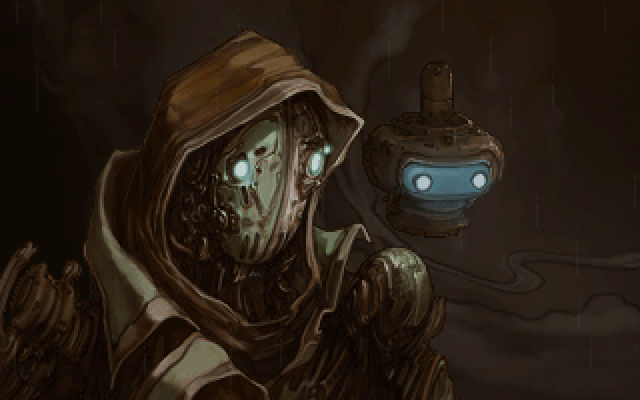 I’ve been writing primarily about the mechanical aspects of the god: what the player can do with the god and to the god. There’s a reason for that. The best way to define a character in a game is by the gameplay. Gameplay is like the “showing” of a character in the shopworn “show, don’t tell” writing advice, while narrative is like the “telling.” I’ve mentioned this in connection with Horatio in Primordia: he had to be a scavenger and a tinkerer and a near-pacifist because scavenging and tinkering and eschewing violence are important point-and-click conventions. Horatio needed to be laconic because with so many other characters, if he were a chatterbox the dialogue would become too extensive. Thus, his core traits were dictated (and I would say demonstrated) by the gameplay before any narrative. The same lesson applies to the god in Fallen Gods. 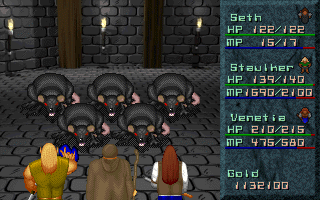 That lesson was first suggested to me in the mid-90s by Scott Dudley, who was making the ill-starred and in-hindsight-troublingly-named Legend of Talibah, a PC Japanese-style RPG. I was a high schooler well into my own ill-starred PC jRPG making career, and I corresponded a bit with Scott about his game, which featured a party member named “Staulker.” I opined that this name seemed a little much, and he replied that Staulker would prove his bad-assery in combat, which, he explained, was really the way that you show a player that a character is cool. A few years later the same lesson was repeated by Suikoden, in which the also ridiculously named Kwanda “Iron Wall” Rosman (an enemy general who could turn coat and join you) was defined primarily by his absurdly high defense statistic, and others of the 108 “Stars of Destiny” were similarly defined by look-and-feel rather than expository dialogue. Yet more years later, Chris Avellone made the same point about western cRPG companions (specifically, that players reacted to them primarily based on how useful they were).

So what character traits arise from the gameplay constraints in Fallen Gods? Well, the game doesn’t really have “quests” in the way a typical contemporary RPG does (i.e., meet NPC; learn about NPC’s problem; visit other NPCs to learn yet more context; discover various solutions; choose a solution; implement it over multiple steps; return to receive a reward). Our encounters usually resolve quickly, with a single paragraph of text describing the dilemma, a single multiple-choice decision resolving the dilemma, and another single paragraph describing that resolution. In order for those thin dilemmas to have meaning, they need to be about the god’s interests, since there is no pathos-laden dialogue tree to make the NPC’s interests compelling.

Thus, they typically take the form of, “Someone is between you and something you want: how can you get it most cheaply?” Whether a foe’s barring your path, a friend’s sharing a gift, or a stranger’s offering a reward, the god’s instinct is to give up as little as he can and get as much as he can. The game’s overall narrative needs to establish and reinforce this self-interest, and so the god—who is, after all, trying to escape the world’s sorrows and not lift them—must be a self-interested figure. 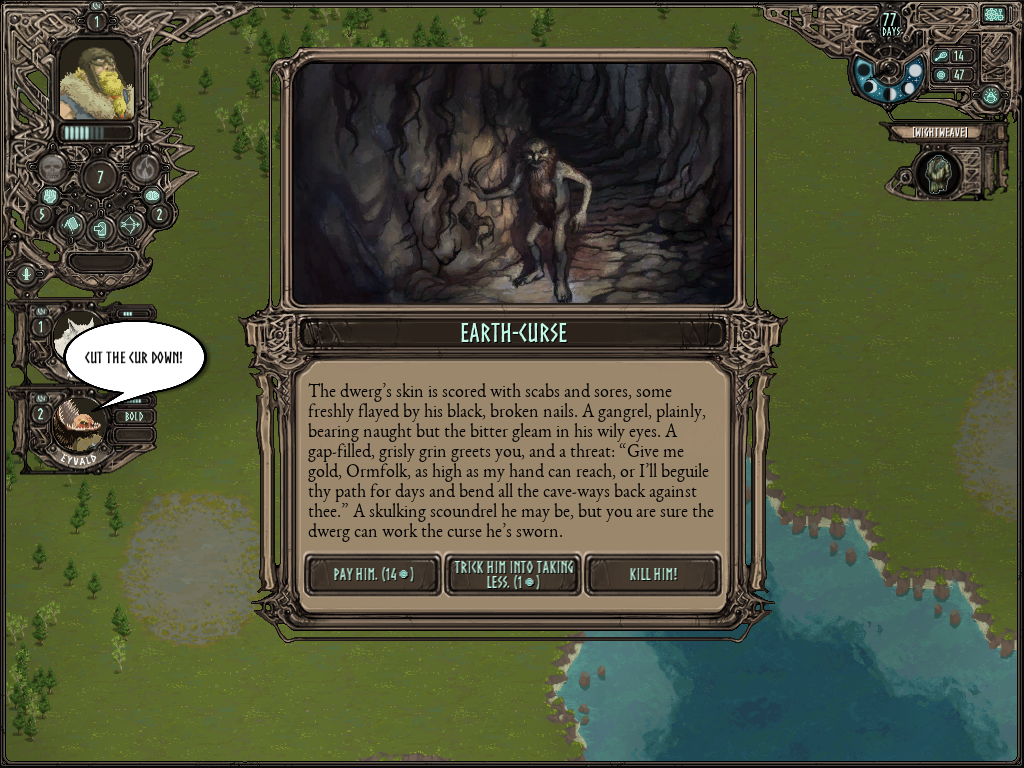 This self-interest is further compelled by constraints on interactions with followers. A mainstay of RPGs since Baldur’s Gate (arguably, since Ultima IV) has been intra-party interactions in which the player character talks to, and usually panders to, his companions. The more the player panders, the more his companion opens up, either as a romantic partner or a troubled friend in need of therapy, or both (as in Bioware games). This entails multi-stage, elaborate dialogue trees (e.g., the Circle of Zerthimon) delving deeply into the rich history and unique psyche of the NPC.

Fallen Gods has no dialogue trees. And the followers in the warband are not unique characters. Each berserk is like other berserks, each churl like other churls, and so forth. Mostly, they are ciphers like “hirelings” in Neverwinter Nights or Diablo II or soldiers in X-COM. Even when they interject thoughts and participate in events, they do so as fairly generic types, rather than as rich individuals, like a thinner version of the Clan Circle in King of Dragon Pass. Thus, the god simply cannot be a thoughtful leader of men like Shepard in Mass Effect or The Nameless One in Planescape: Torment, one who takes the time to learn in excruciating detail the lives of his followers. He, like the player, must view his followers as chess pieces: means to an end rather than Kantian “ends in themselves.” He is again motivated by self-interest: what can they do for me and what must I do for them? That is true whether he’s giving them orders or giving them gifts. The latter is an important, thematic part of a saga-inspired setting: to be a leader is to be a ring-giver. But unlike gifts used in Dragon Age: Origins to foster romance and delve deeper into psychoanalysis, these gifts are given only to strengthen the followers and reinforce the bonds of loyalty tying them to the god. If a churl began to share sob stories from his rough childhood, the god would almost certainly stare him into shamed silence.

This overriding self-interest will likely create a gap between what the player wishes his avatar would do and the game lets his avatar do. Generally speaking, people want to do good, and that desire is particularly strong in single-player games, where doing good carries no meaningful cost (maybe a little less fictitious money paid to your avatar as a reward for his quest). People call this a “power fantasy.” Fine. But it is emblematic of the noblest aspect of fantasy: its ability to train us to view doing good as the proper exercise of power. 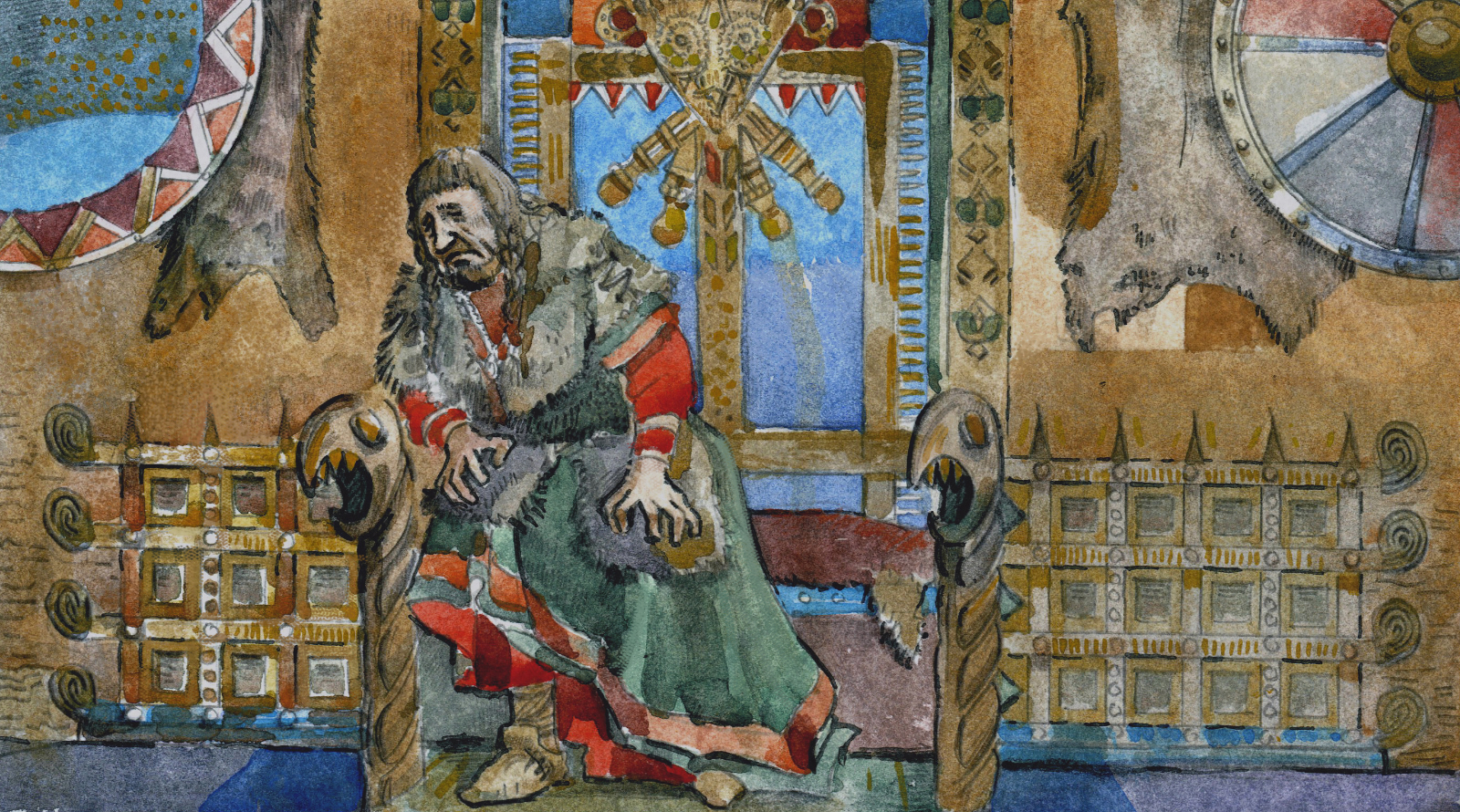 Fallen Gods has a crueler edge to its fantasy. Although the gods’ foes are mostly wickeder than he is, and although he is certainly capable of doing some good in the world, his motivations are ultimately selfish. He can be bold and open-handed, fearless before fearful odds, clever in outwitting evil minds… but at bottom, he is not on earth to accrue Paragon points, but simply to achieve escape velocity, no matter what gets scorched in his wake or battered down along his runway. Rather than a fantasy in which the player can practice goodness, it is a fantasy that hopefully will leave the player convinced he can do better in this world than the fallen god does in the game’s world, even if the player doesn’t have the same panoply of powers.

NEXT UPDATE: Witches and Dwergs.

Many people have asked about our pixel graphics.  They are made, dot by dot, by Daniel Miller, an avant-garde artist currently doing a series of residencies in Asia.  He actually does very little pixel art. While his live performances cannot be captured on a website, you can get a taste for the breadth of his work in his online galleries (as is not uncommon of artists portfolios’, these contain nudity): https://www.instagram.com/bydanielmiller/ and http://bydanielmiller.com/

A little over a year ago, I talked with Dan Felder, a thoughtful commentator about P&P RPGs, about how gameplay considerations should dictate character- and world-building.  You can listen to the two parts of the interview on YouTube: Part 1 and Part 2.

King of Dragon Pass, mentioned in previous updates as a significant influence on Fallen Gods, is a gem of a game.  You can get it for PC (75% off as of 4/17/18) or iPhone. The great folks behind it are in the process of making a sequel entitled Six Ages, which looks marvelous.

I fell out of touch with Scott Dudley decades ago, but was pleased to see that he went on to be not merely a successful game developer but something of a renaissance man.  Here’s his website: http://zaskoda.com/
Posted by Wormwood Studios at 9:52 PM