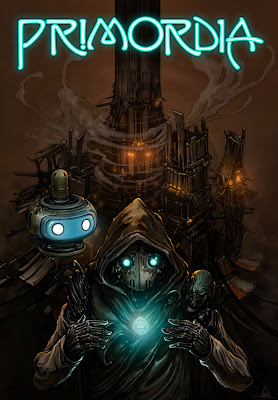 Ages have passed since legendary Man walked the planet. Now, in the wastelands beyond the city of Metropol, a solitary robot named Horatio jealously guards his freedom and independence. All that is taken from him when a marauding foe steals his power core, forcing Horatio to leave the safety of his home and set out on a perilous journey into the wastes . . . and his own mysterious past.

Primordia is a point-and-click adventure game that combines the challenge and depth of the classics with a streamlined interface and a player-friendly design: puzzles emphasize logical thinking and exploration, rather than trial and error or endless backtracking. The game features over fifty hand-drawn rooms, dozens of distinctive characters, and gorgeous painted cutscenes.


Primordia has enjoyed overwhelming fan support and modest critical acclaim. It was Greenlit on Steam faster than any prior game, it is among the highest rated adventure games on GOG.com, it has 97% positive reviews on Steam (with hundreds of reviews), and it currently enjoys an 8.8 user score on Metacritic. Adventure Gamers and Adventure Classic Gaming both gave Primordia 4/5 stars, with Adventure Gamers also awarding it Best Setting of 2012. Among mainstream reviewers, the game has fared a bit worse, with a 72 Metascore on Metacritic. The lowest review (2.5/5 stars) can be found on GameSpy. By contrast, independent and foreign reviewers gave quite favorable assessments of the game:
Primordia is accompanied by “Fallen,” a spin-off short story available as an illustrated PDF or ePub (smaller resolution here), or as an animated audiobook. Although the story takes place after the game, it contains no spoilers, and thus can be read to get a taste of the game’s setting and themes.

A demo of Primordia is available for download. The game can be purchased through GOG.com, Steam, or the Wadjet Eye Games website. Each vendor has its own upsides: GOG includes a copy of the soundtrack (among other goodies) and a Mac version with an integrated front-end; Steam has integrated achievements; and the Wadjet Eye version yields slightly more money for the team, as the sales-processor takes a small slice of revenue. We recommend purchasing the game wherever it can be found cheapest, and we will try to update this page to indicate where it can be found at the steepest discount.  The soundtrack can be purchased separately on Amazon.

A beautiful and poetic French translation can be downloaded from the Primordia website.  There is also a wonderful Spanish translation for Steam and GOG.

For those who are curious but would rather not play the game, very good Let's Plays can be found on Something Awful (videos here) and RPG Codex.