In addition to our commercial releases Primordia and Strangeland, we have released a few small games over the years: 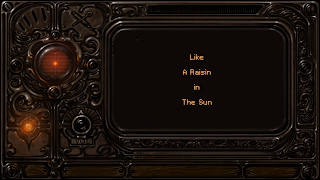 The first, Like a Raisin in the Sun, is essentially a mood piece—it’s not really a game so much as short work of fiction about a robot who would like to bake a cupcake. You interact with the game by pursuing various strands of the story to various conclusions. It’s quite short, and any given play through shouldn't take more than a few minutes. 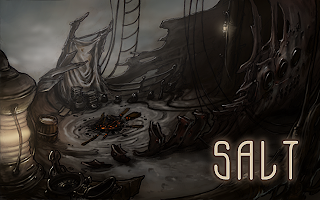 The second, Salt, is a traditional, albeit small, point-and-click adventure about the aftermath of a shipwreck in the Antarctic, loosely based on the doomed Franklin expedition. It’s a somewhat longer experience, but—unlike Raisin—it’s only good for one play-through.

Next, Until I Have You is a platformer created by James Spanos, the programmer of Wormwood Studios. Among other things, it represents one of the most incredible transformations of the Adventure Game Studio engines ever, one reason why James received the Lifetime Achievement award from the AGS community.

Finally, during the development of Primordia, Victor Pflug—Primordia’s lead artist—made Beacon, a short, atmospheric point-and-click adventure.  While technically not a Wormwood Studios game, Beacon will feel familiar because of Victor’s unmistakable style and its robotic protagonist. 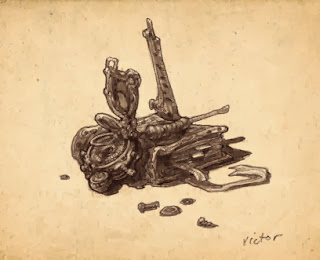 While they are not not games, some of Mark’s published stories are available online.  These were generally written ten to fifteen years ago, but they riff on some of the same themes that appear in Primordia.  Here are a few samples:  “But a Walking Shadow” (previously published as “Phantoms”); “Mere Potential”; “Mind’s Eye”; “New Mansions”; and “Angels at Penumbra.”  From 2007 to 2008, Mark also wrote a series of articles about game design for The Escapist under the pen-name Marty O’Hale.  These articles are: “Killjoy” (about the problems with narrative-based games allowing the player character to regularly die); “A Childhood in Hyrule” (about the importance of game designers drawing on influences outside of gaming); “The Four Virtues of FreeCell” (about structuring goals and interaction); “Who’s in the Driver’s Seat” (about the difficulty of reconciling player choice with a strongly define protagonist); “Go Virtual Young Man” (not really design oriented; more just musings about online gaming).