The past year has been a very good one for Wormwood Studios, and I think we’ve laid the foundation for an exciting 2020.  As always, we owe these successes to the support of our players:  without your encouragement, we’d never be able to make it through the inevitable low points of the development cycle.

In 2019, we released a major Primordia patch, likely the last we’ll ever do.  We ported the game to a new version of AGS, which significantly improved stability on modern machines, integrated French, German, and Spanish translations, fixed dozens of bugs (including a few reasonably significant ones, such as the inadvertent removal of music from an important scene), and included a variety of quality-of-life improvements to the game’s UI.

We also hit 2,000 reviews on Steam, a significant milestone by any measure and a particularly significant one for an indie adventure game.  The only other AGS title to reach that number is The Cat Lady, and it’s more reviews than Thimbleweed Park has, despite that game’s far greater prominence.  Player reviews not only help keep the game commercially viable (it’s really the only way that new players get brought in at this point), they’re also a great reward for us in and of themselves, since that kind of interaction is one of the best aspects of indie game development.  We’re lucky that reviews have held strong over the years—though our halcyon days of 98% positive are behind us, 97% percent isn’t too bad!

In one of the crazier and more delightful pieces of fan art, the Spanish heavy metal band Taste My Sweet Revenge put together two Primordia-based metal songs for their soon-to-be-released album.

Finally, we were approached with an interesting proposal from a television producer to create an animated adaptation of Primordia.  These things usually come to nothing, but we’re cautiously optimistic, given the producer’s track record, interest in science fiction (particularly robot-oriented sci-fi), and excellent background in visual effects.  We’ll post more when there’s more to share. 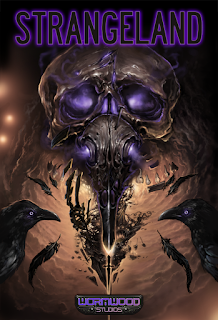 Strangeland can now be played from beginning to end, although it is missing a considerable amount of art (and some design) in the last 15% or so of the game.  We had hoped to finish it entirely in 2019, but we’re very close now.  The game is divisible into four sections, and we’ve had testers play the first two of those sections extensively.  The reactions seem quite positive.

Strangeland’s a bit, well, strange, in that the whole thing is confined to a dream-like carnival, which makes it feel much smaller than Primordia, even though the actual number of rooms, puzzle interfaces, characters, and so forth is probably roughly comparable.  The art is spectacular (no surprise), and benefits from four times the pixels that Primordia had in terms of resolution.  But the real leap forward, I think, is in the code.  There are dozens of features, from striking visual effects to behind-the-scenes conveniences, that make Strangeland really exceptional.  Without James’s code wizardry, there would have been no way to achieve the warped and unnerving scenario that the game requires.

We’re very hopeful for a 2020 release for Strangeland. 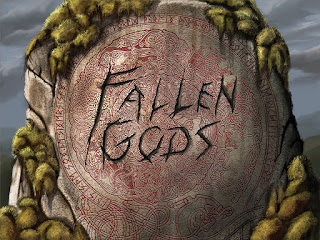 For a good while, I was writing Fallen God design updates that were really fun, but really time-consuming, to put together.  Then I got out of the habit, and decided that I should focus all my time on design/writing on the project.  The result has been an apparent stoppage where, in fact, there was tremendous progress.

As I’ve tweeted about recently, Fallen Gods is now a proper game—you can win and lose, and do everything we wanted on the way to that victory or defeat.  We still need quite a bit more content, and a lot of balancing, and then even more play-testing, but for the first time in the many years of development, it now feels inevitable that the game will be completed.  I am reluctant to put any release date on it, but 2020 is not out of the question.

Once again, many thanks to all of you who have made our successes possible!  Hopefully we will live up to your support in 2020!
Posted by Wormwood Studios at 1:52 PM