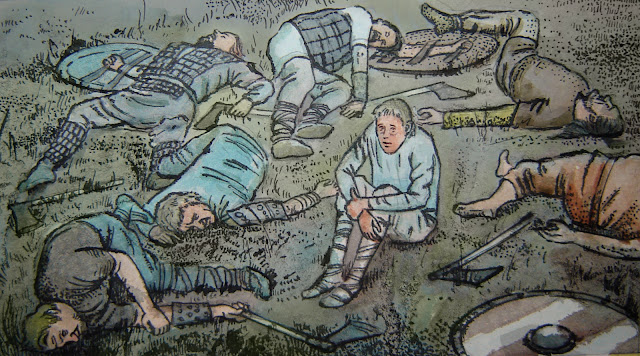 Wounded and weary, a young man sits beside his battered axe and shield. All about are fallen friends and foes who, unlike this youth, have lost their lives but kept their hope. His empty, guilty hands hold no gold to atone the dead and end this gruesome feud, and his doom resounds as if the Nine sang here aloud: blood begetting blood, kith upon kin, a red wave washing away all those bound by love, oath, and wrath to war until the end. He stares at you, shaking, speechlessly beseeching.


I want you to imagine a world in which meeting your brother’s murderer on the road is sufficiently likely that a wise man might pause in his practical advice to give you suggestions as to how to handle such an encounter.  That’s how the Hávamál, a kind of Norse Ecclesiastes, goes, and the suggestion (reasonable enough) is not to trust such a man-slayer. To the Hávamál’s skald, such a danger is no more or less worth warning about than rootless trees (which might tip over in a wind) or too much drink (which could lead to public embarrassment).  A man should not trust in any of these, the poem warns.  Everywhere is man against man, man against nature, and man against himself, and death hovers above all things like a hungry raven.

When reading the Norse sagas, what stands out to me about the violence is not so much its quantity—which is much less than in the Iliad, for instance—but its quality.  The variety and specificity of wounds, along with knowledge of their consequences and the ways of trying to treat them, bespeak the skalds’ firsthand or at least secondhand experience with killing and maiming.  We often think of modernity as violent, but in truth most of us will have the good fortune never to be caught up in the kind of bloodshed these sagas describe:  battles, burnings, and butchery.  The sagas’ authors, particularly whatever skald composed Njal’s Saga, are by no means desensitized to this mayhem.  This is not the proverbial water in which a fish swims, blissfully unaware; it seems more like water in which the author is drowning, fully and fearfully conscious.  A whole nation can be dragged down by such bloodshed: “by lawlessness, laid waste.” 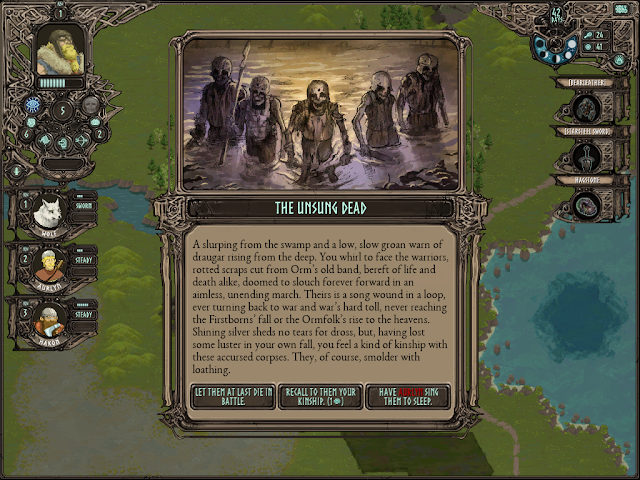 This image of men sinking into a bloody mire of their own making has been a key part of my own writing and design for Fallen Gods.

Like many kids drawn to fantastical settings, I grew up taking comfort in the way fantasy situates violence within a moral plan.  Fantasy novels are chock-full of bullied young protagonists, last survivors of near-universal slaughter, and heroes who seem helpless and hopeless against villainous might.  This suffering is not just a preamble to, but a prerequisite for, later salvation.  It is not merely that the wicked are punished and victims avenged; those who have been wronged find themselves, Job-like, even richer than before.  (As a boy, I entirely believed that, say, Luke Skywalker could somehow be more than compensated for the trauma of coming home to the still-smoldering corpses of his murdered family.  But it turns out that old wounds only ache worse as the years go on, and there is no psychic currency with which early losses can be offset by later gains.)

In typical fantasy novels, when a villain tortures a brave young woman or torches a helpless town, the bitter herb of his evil is mixed with the sweet confidence that he is merely sowing the wind.  Even in ostensibly “grim-dark” series such as A Song of Ice and Fire, the long arc of history bends in favor of “breakers of chains” and once-bullied bastards.  I mentioned earlier that “the noblest aspect of fantasy” is “its ability to train us to view doing good as the proper exercise of power.”  Here I’ll add that its capacity to comfort, even if a kind of deceptive opiate, is no small virtue either.  Run-of-the-mill childhood bullying is hardly the worst thing in the world, but it’s still rough, and that roughness is at least a bit diminished by books like The Once and Future King or any of a thousand other stories.  But here, too, our game offers something different. 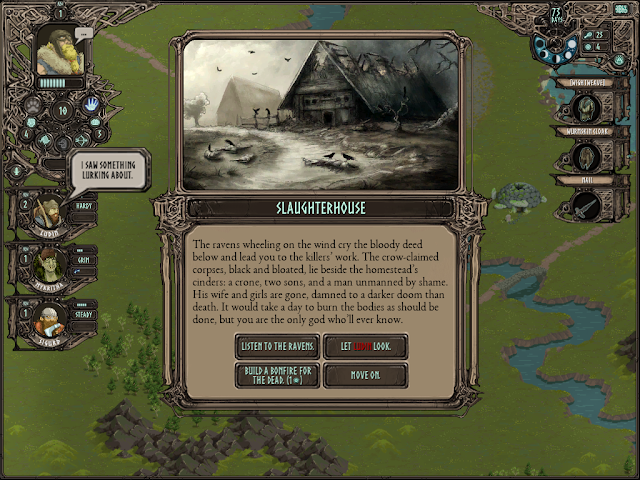 Unlike such fantasies, neither Fallen Gods nor the sagas that inspire it promises a moral plan for violence.  When the strong use their might to hurt the weak, that does not necessarily set in motion a Rube Goldberg device by which the aggressors will ultimately suffer a comeuppance at the hands of their victims.  The bloody slaughter of a people does not imply that the lone survivor will one day become king over a just, prosperous, and fecund realm; he may simply wind up an outlawed murderer meting out a measure of revenge until the day he’s caught and killed.  Or he might not even make it that far.  Perhaps, weak and weary, he’ll be run down a few days later and speared where he sleeps.

Our game’s setting is a world already whirling in the cyclone of such violence, and its story is that of a powerful, selfish fighter who sees others merely as a means to an end (or, we might say, a means not to end).  To tell that story in that world means not flinching back from its ugliness—one must heed the cry of Aldonza in The Man of La Mancha when she is at last pushed to the brink by Don Quixote’s refusal to see the fullness of her suffering: “Won’t you look at me, look at me, / God, won’t you look at me!”  As in the sagas, violence in Fallen Gods knows few limits, and it falls on the weak and undeserving no less than on the mightily wicked.  Their suffering deserves to be seen and told. 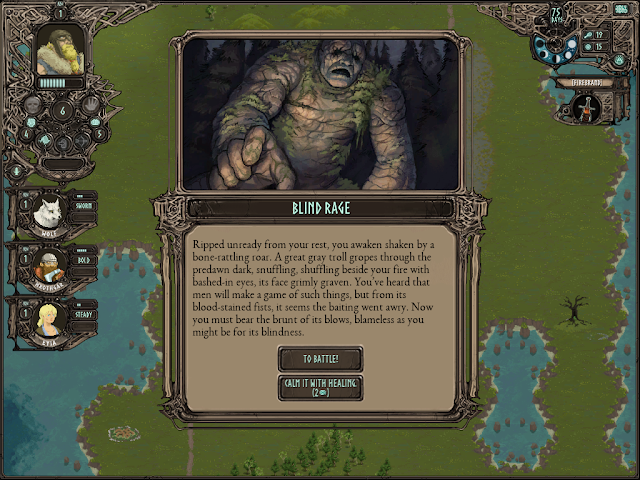 That’s not to say that Fallen Gods features nothing but ugly violence or that its depictions of violence are especially gory or torturous.  By the standards of modern video games and or R-rated movies, the violence is sparing and its depiction is restrained.  But it is designed to have a bit more heft.

As with other aspects of Fallen Gods, that heft is conveyed mechanically. Because HP are so limited (typically single digit, even for a powerful warrior), every wound is serious.  Healing is painstaking—in the field, resting restores a single HP per day, and time is valuable.  There are no healing potions; rapid recovery can be achieved only by the godly skill of Healing Hands, which costs precious soul-strength, a resource the god gains only with difficulty, as previously discussed.  Sickness (which encompasses both poison and disease) causes a person to grow weaker, rather than healthier, with each passing day, and unless you are strong enough to outlast the ailment, only Healing Hands or a priest’s craft can help.  So too with crippling, a condition that halves the might of the injured, leaving him or her vulnerable in combat and much less helpful in events.

The seriousness of violence is also conveyed visually.  Our attack and death animations avoid majestic or balletic movements.  Though blood and gore is minimal, blows are meant to convey force; we want the player to wince when he sees a churl club a wolf’s skull.  Illustrations likewise show battle not as glorious but in its rough-and-tumble grit.

Finally, Fallen Gods uses its narrative to drive this point home.  The vignettes told through events involve not only battles in which the god participates, but also the aftermath of battles he’s missed, the weary despair that comes from the anticipation of battles that have not yet materialized, the economic drain of feuds, and so on.  These events rely in part on the differences in perspective among the god (who is largely oblivious to others’ suffering), the narrator (who is aware of that suffering but takes it as a fact of life), and the player (whose values are likely very different from either the god’s or the narrator’s).  The parallax effect of these overlapping perspectives is meant to be disconcerting and in some instances even dizzying, as when the narrator grumbles about surly thralls going about “unbeaten by their betters.” 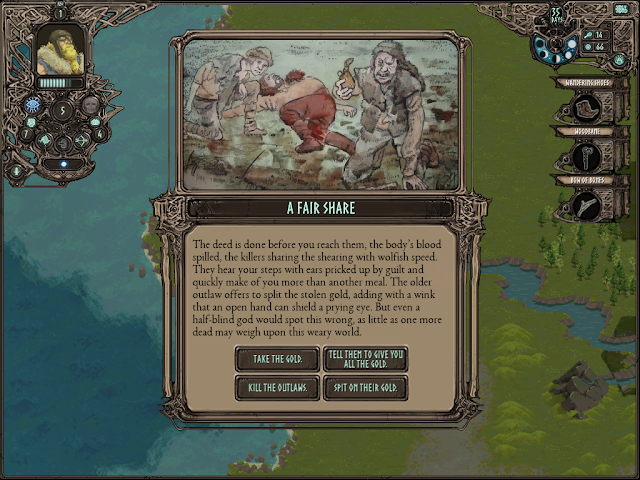 Fallen Gods is an adventure in which the player has the opportunity to slay foul creatures, wield magical weapons, win powerful allies, and earn the admiration of many.  But it is not unalloyed heroic fantasy, for beneath and within this quest is a frank and cautionary look at the uglier side of a world in which meting out death is viable way of life and perhaps the only way back to the heavens.

NEXT UPDATE: Anatomy of an Event

To my taste, Cormac McCarthy is the best modern skald of violence and its awful price, and his most compelling work in this regard is Blood Meridian.  In a similar vein are Brian Hart’s The Bully of Order, Ian McGuire’s The North Water, Philipp Meyer’s The Son, which is probably the least agonizing of the bunch.
Posted by Wormwood Studios at 7:51 PM